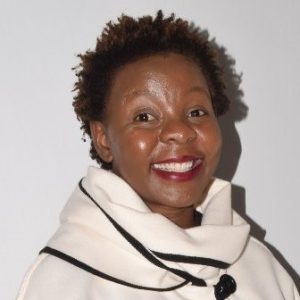 n/a
Gender, Governance and Development Specialist
Category: Empowerment of Women in the Community

Ms. Everlyne (Eva) Komba works as a Gender specialist, with experience in Gender Mainstreaming, Gender Policy Development, Analysis, Implementation, Monitoring and Evaluation, Gender research, Gender Data Advocacy, Gender Capacity Enhancement, Women Empowerment, Access to Gender Justice. Over the last 10 years, she has spearheaded initiatives for both state and non-state actors in Africa and Internationally. Among her other notable achievement is being a panellist at the Commission on the Status of Women in 2016. Her other notable achievements include anchoring two global Campaign to End FGM carried, one that was undertaken by the Guardian Media UK in 2014 and the other by Girl Generation in Africa in 2015. Similarly, she helped shape discussions with Women groups which culminated into petitions for gender law reform in South Africa through her work with Embrace Dignity and Coalition against Trafficking in Women 2016. She continues to do similar work in Somaliland and South Sudan. In the same token, as part of a global coalition in 2017 she helped lobby the Italian parliamentarians, at the house of deputies in Rome, to back efforts towards ending sexual exploitation of women and girls along the Kenyan Coast. She has lent her voice to the International FGM summit held in France in 2018. She was also a speaker during the 2019 International FGM researchers conference held in Belgium, presenting a paper titled “FGM and climate change”.  In her native Kenya, Everlyne’s tenure as the coordinator at the Kenya Women Judges Association, is best remembered for the partnerships fostered between UNWOMEN, UNFPA and UNDP with local actors in the justice chain to facilitate easier access to justice for women and other vulnerable groups. She has contributed greatly to the development of sub-national government gender policies in Kenya. Everlyne has contributed articles to peer reviewed journals and general publication magazines. Her education qualifications include a Master of Arts Degree in Gender, Women and Development Studies and a Bachelor of Arts Psychology from Egerton University, Kenya. In addition, Ms Everlyne has undertaken several short courses in gender.  She currently leads the implementation, tracking and reporting  of SDG5 in Kenya as a Gender Lead at the SDGs Kenya Forum.