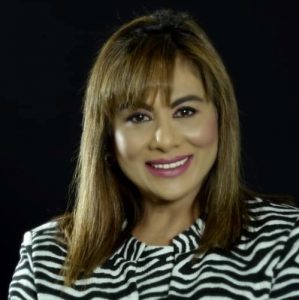 On the surface Dr Shamila Ramjawan, former Mrs Johannesburg 2019, is an accomplished, renowned, formidable and well-respected multiple global award winning entrepreneur. As a young widow raising two children and taking many business risks, her journey has been one of consistently breaking barriers. She uses her inspiring life stories to inspire and motivate individuals to unleash their true potential. Shamila is a Business Management Lecturer at the University of South Africa (Unisa), and a global women empowerment speaker who focuses on personal branding, mentoring and coaching.

She earned a Honorary Doctorate of Humanitarianism from the Global International Alliance (GIA), United States of America, accredited by International Association for Continuing Education and Training Accreditation (IACET), USA for her humanitarian work across the globe. She was appointed as a Board Member for the GIA and is currently the Chairperson for South Africa. Shamila is the South African Chairperson for Ladies of All Nations International (LOANI UK) the largest women empowerment platform in the world, with a representation in 150 countries. She was recently appointed as the Country Director (South Africa) for the International Youth Society (IYS), with a representation in over 140 countries and is the President of the IYS in South Africa.

This published author possesses an MBA degree amongst her many educational qualifications. She was awarded a full scholarship from Honoris University (MANCOSA) where she will fulfil her dreams in completing her Doctor in Business Administration (DBA) in 2021.

With her continuous and admirable work in communities, Shamila has earned the “Play Your Part” Ambassadorship for Brand South Africa. She has two registered companies, Famram Solutions (marketing and communications solutions) and Famram Foundation, a self-funded family organisation that empowers, uplifts and provides CSI solutions to enhance socio-economic development in the deep impoverished areas.

Having worked with communities for decades, Shamila realised there was a need to research the menstrual cup because impoverished girls miss school for 5-7 days a month during menstruation. In 2016, she launched the PrincessD Menstrual Cup which is cost-effective, eco-friendly and hygienic. Currently the product is available in over 20 countries, pharmacies, health and wellness centres, and is prescribed by many doctors due to its incredible health benefits. She has impacted and changed the lives of thousands of schoolgirls worldwide, with her “keeping girls in school” project. PrincessD Menstrual Cups are funded by corporates and individuals.

Over 350 schools and thousands of schoolgirls in South Africa have benefitted from these sponsorships and donations. The success stories of keeping girls in school has been overwhelming for Shamila. She professes that this is her calling, passion and purpose and a dream being fulfilled to touch the lives of so many people.

Shamila has earned many accolades and these include:

2016: Semi-finalist in the Emerging Entrepreneur Category of the South African Council for Business Women Competition. Received the Panache’ Woman of Wonder (WOW) award. A finalist in the Margaret Hirsch Achiever of the Year. A nominee in the Woman: Real Architects of Society Special Award in the “Unsung Heroine” Category.

2017: Recognised by Champion South Africa as the Champion of the Week. A nominee in the Standard Bank Top Women Entrepreneur Awards. A finalist in the Social Entrepreneur Category of the Business Woman’s Association (BWA) Awards. Winner of the OWAMI Women’s Award. A finalist as a Top Performing Entrepreneur in the National Business Awards. Global Awardee: Centre for Economic & Leadership Development (CELD) : Global Female Leadership Impact Award 2017 Dubai; Induction: Global Women Leaders Hall of Fame (GWLHOF) Dubai; and featured in the January 2018 special Edition of Amazons Watch Magazine as the Top 100 Most Influential Women to watch in Emerging Economies.

2018: Woman of Stature Awards: Entrepreneur of the Year. Women Economic Forum (WEF) Global Awardee: Iconic Woman Creating a Better World for All in New Delhi, India. Oliver Empowerment Awards: Entrepreneur of the Year Finalist. Identified as one of South Africa’s Top 50 Entrepreneurs to Watch. Rotary Club Paul Harris Fellow Awardee, awarded by the Reservoir Hills Rotary Club. South African Ambassador/Chairperson for Ladies of All Nations International (LOANI). Received an impact award in Morocco by LOANI. 1 of 40 Honourees for the 7% Tribe Foundation, Steyn City. The only South African Laureate in the Women In Africa (WIA) Summit in Marrakech.
A finalist in the Entrepreneur of the Year Award for the National Business Awards. Invited to judge the Elite Miss India/Mrs India Pageant in New Delhi, India and scooped another award as a Global ChangeMaker.

2019: African Leadership Persons’ of the Year and induction into the CEO’s Hall of Fame. Humanitarian Award at the Miss India Gauteng Pageant. Recognised as the Pan African Awards Most Influential Woman in Business Country Winner in the SME sector of CEO Global. Business Leadership South Africa (BLSA) Manager of the Year 2019.

Shamila was 1 of 8 “Thrivors” for Season 1, Real TV Docu-Series (recorded in 8-28 October 2019). The theme “a million dreams for the Win Win Wins” is right up this philanthropist’ alley as she thrives on changing lives. She spent 21 days in a tent, ate plant-based food, fundraising and honouring community projects in Swellendam, Western Cape. The reality show will be released on Netflix in 2020.

2020: Women Appreciating Women (WAW) Honorary Award – 1 0f 100 most inspirational women in the world – Awards Ceremony in London on International Women’s’ Day (8 March 2020). 100 Successful Women in Business Awardee Global Trade Chamber– 28 March 2020 in Miami, USA. 1 of 30 global women recognized for International Women’s Day by the NGO Whisperer. 1 of 8 global visionary leaders by Ladies of All Nations International (LOANI) for International Women’s Month and featured in the March Issue.  “She Inspires Me” Award by a UK organization in March.
“The Best Humanitarian” award Els Edification Plus UK. The Red Blazer of Excellence and Achievement Recipient by Mr Carl Wilson from All Women Rock, USA. Honorary Doctrate in Humanitarianism from the Global International Alliance (GIA), powered by the United Nations, processed by Stanford University and approved by the International Association for Continuing Education and Training Accreditation (IACET), USA. Appointed as Chairperson for South Africa by the Global International Alliance (GIA). One of 35 women globally for the prestigious “Crown” award from the USA- event will take place in August 2021 in California. One of 30 Influential Women in South Africa. Global Changemaker Award from Ladies of All Nations International (UK).

Shamila is open to challenges, conversations and an exchange of ideas. She launched her own global talk show “Red Corner Show” where she engages with woman and men from diverse cultures across the world to share real life stories to empower, inform and inspire others inclusively. From inception in August 2020, she has interviewed over 100 men and women from across the globe.

This unstoppable woman of substance debuted as an actor in a South African movie, “Who’s My Daddy”, directed by Sans Munsamy and produced by David Kau, due to be screened nationwide in cinemas in 2021. She has been signed on for a further two movie roles which will be shot in 2021. Shamila has also been identified as one of South Africa’s unsung heroes to be featured in a documentary alongside well-known celebrities.

The hashtag #SheOwnsHerSuccess by Momentum is befitting for Shamila. She bagged a whopping R200 000 (her share of R1m competition) from Momentum on the 8 March 2020 on International Women’s Day to inject into her business endeavours. It’s a no brainer that this phenomenal woman owns her success and is ever so grateful to Momentum, “this cash flow injection came at the most appropriate time during the Covid-19 pandemic”, says Dr Shamila Ramjawan,

Shamila has been recognized as one of the global Ambassadors by US bestselling author Dr Larita Rice Barnes, for “My Pink Stilettos” a book available on Amazon, that is co-authored by 17 women from across the globe which was released in October 2020 in view of breast cancer awareness month. Her chapter in the book is “Keep on, keeping on” where she touches on her life as a single parent, raising two young kids.

Inspired by well-known trailblazer writers, she herself has written over 250 quotes to date and hopes to publish her third book in the near future. Some of her inspiring quotes are:

“Nobody will ever realise your struggle until you disclose your story. Be the one to comfort others by talking about your hardships and where you came from. It will surely inspire others and create awareness that there are opportunities out that they can grab and steer their own ship to success. Never ever give up.”

“Your messages to the world must be words of encouragement, motivation and inspiration. If you live it, share it.”

“She is the epitome of style, class and elegance. Her aura oozes with determination, confidence and charisma. She is hungry for challenges and success. She settles for nothing but love and light. She is a WOMAN – Let’s stop Gender Based Violence.”